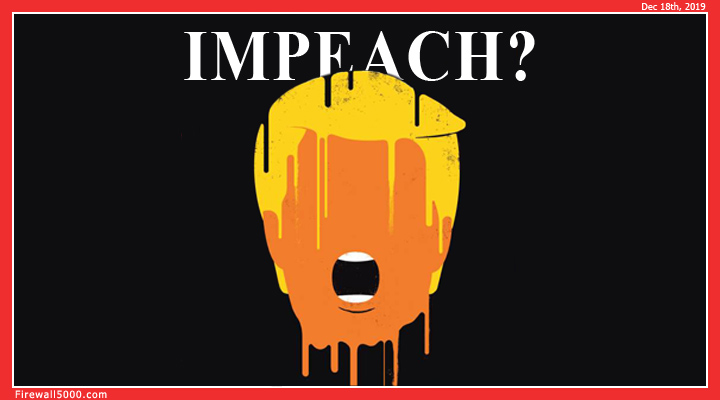 My sentiment towards Trump is about as hostile as those who constantly call for his impeachment. However, I’ve shy’d away from backing this because I think it’s a tactical error. In fact, I recently had an exchange with someone who acknowledged the shortcomings of an impeachment. However, still insisted it had to be done anyways otherwise rules wouldn’t mean anything.

You’re suggesting rules currently mean something in American politics? LOL. You mean like when George W. Bush lied us into a war with Iraq? Yeah I don’t recall Dubya getting an impeachment for this. Plus, that was 16 years ago and there’s been plenty of time to charge both he and Dick Cheney for war crimes. And still…   *crickets*

If you play their crooked game you can get away with just about anything.

Now onto why I think impeaching Trump is mistake and it’s really quite simple. If impeachment is successful all that’ll accomplish, is he’ll be replaced with Mike Pence. In a lot of ways Pence is a more cunning version of Trump.

Unlike Trump, he is an experienced politician who doesn’t feel the need to make an ass out of himself on Twitter every morning. Pence will be able to command a lot more respect from the Republican Party. He’ll simply just pick up right where Trump left off & carry out his goals more competently too.

Oh and lets not forget all those center-right Republicans who don’t like Trump cuz he has a potty mouth on Twitter. Many of which are seriously considering voting for whoever gets the Democratic nomination in 2020. Suddenly those guys will warm up to a Prez Pence and will drift back into the GOP camp.

Secondly if Trump does get impeached, think of all those Trump supporters that neglected to vote in 2016. I guarantee you if he’s thrown out of office they won’t make that same mistake in 2020. They won’t be protesting but instead they’ll show up in record numbers on election day.

As much as I hate to say this, Trump is actually the perfect person to have in office right now. Because if Bernie Sanders gets nominated then simply put Trump is toast. During the 2016 primaries the polls consistently showed Trump as being the weakest polled GOP candidate against Bernie. That was one of many reasons why they didn’t want to see him nominated. Many polls now show Trump in an even weaker position if he goes up against Bernie in 2020.

A Bernie vs. Trump scenario is both the GOP and corporate Democrats worst nightmare!! Replace him with Pence, and Bernie will have a much more difficult time getting elected.

Look I’m not gonna lose sleep on whether the Manchild-In-Chief gets impeached or not. If he gets impeached… fine.. but I still think it’s a bad decision for the reasons mentioned above.